“Hello. My name is Aiba. What is your name?
“How are you? I am currently 92% charged and feeling well.”

She is an artificial intelligence that resides within the protagonist's left eye, Kaname Date in the first game and Mizuki Okiura in the second. Together with either Date or Mizuki, she works for the Tokyo Metropolitan Police Department to solve crimes and catch criminals, in particular the culprits of the Cyclops Serial Killings and the Half Body Serial Killings. She appears as Date's avatar within a subject's Somnium, where the pair work together to delve into their dreams and gather useful testimony and evidence.

In the real world, Aiba primarily takes the form of a single eyeball with a yellow iris, which most of the time is retained within Kaname Date's empty eye socket. When she is detached from Date and using her motor functions, she adopts a hamster-like mascot appearance. Her projected skin is transparent and grey, with black soles on her hands and feet. Her skin is more like a gelatinous substance, where on the inside her optic nerve is visible as a sort of pink spine.

In the Somnium world, Aiba takes the form of a young human girl. Her skin is transparent and pale, with parts of her endoskeleton visible through her arms and legs. Her hair is white, long, and unkempt, reaching down to her legs, with three pink streaks that light up like an electric current. She wears a long white dress that reaches her waist, with black and pink patterns around the edges and with gaps on her back and shoulders. Her upper legs have the same black and pink patterns, as either tattoos or some imprinted pattern. Her eyes are pink in this form, in contrast to the her hamster form's yellow motif.

She is cold and calculating but has personality when it comes to Date; she disapproves of many of Date's habits, be them chocolate collecting or cabaret clubs, to the point of vocally teasing him, but overall trusts him. However, she has shown the ability to stand up to Date and voice her opinion, as well as her own feelings regarding investigations. She's also something of a nerd, wanting to make dramatic entrances parodying Terminator and looking into Ota's otaku hobbies for "research." 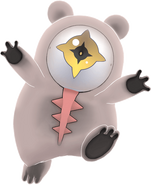 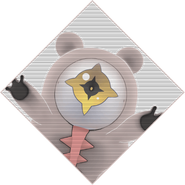 Aiba's bio in the FILE

AI-Ball in a... background design?

AI-Ball in the Somnium World

AI-Ball with Mizuki in the Somnium