Mariha is a university student from Kanagawa Prefecture, Japan. Prior to May 18th, 2022, she was kidnapped for an experiment conducted by Hidden Bats, in which she and Lumina Rikujo were locked in rooms and only able to communicate via Twitter every 48 hours to solve their puzzles.

Mariha is a young woman with a slim figure, bright green eyes, and pink hair worn in a long, high ponytail. She wears a loose white off the shoulder blouse with lace covering her shoulders, with a ruffled neckband and gathered sleeves. Mariha also wears a high-waisted floral pink skirt with a thin black belt, and a variety of accessories, including a red hair bow, green dangle earrings, and pink nail polish.

In elementary school, Mariha befriended Lumina Rikujo. Though they did not speak as much by the time they entered college, they remained friends.

While walking home from college in May 2022, Mariha mysteriously disappeared. Sunaiku Foundation reported her and Lumina's disappearances on the 18th, and began cooperating with the police to resolve the case.

On May 20th, 2022, Mariha awoke in a dark room with only a phone and a locked box with numerical buttons. She was given 21 minutes to use Twitter through the phone, after which it would deactivate again and she had to wait 48 hours to seek help again. Through the account prepared for her, Mariha tweeted about her situation and posted an image of the puzzle she needed to solve just before the time limit.

Two days later on the 22nd, Mariha began tweeting again, thanking those who gave her the solution to the puzzle. Mariha entered the code in the locked box to find another box and two different puzzles. She shared the first puzzle, which needed Twitter's help to solve, before reading the second. The second read:

If Lumina presses the red button, drinking water is given to both of them.

If Lumina presses the yellow button, drinking water is given to Lumina only.

If Lumina presses the blue button, drinking water is given to Mariha only.

Mariha was shocked that Lumina had been kidnapped too. She found Lumina's last tweet and replied to it, telling her to press the red button so they could both get water. Before the time limit, Mariha thought she saw kids playing on a playground.

On the 24th, Mariha once again was able to unlock the box to find another puzzle inside, which she tweeted. She also found a bottle of water and thanked Lumina for pressing the red button. Before the time limit, Mariha wished she could get some kind of hint towards escaping, and wondered what the point of making her work with Lumina was.

On May 26th, Mariha seemed to be getting fed up with her situation when she posted the next puzzle. She read a tweet Lumina had sent her explaining that she needed to send Lumina's birthday to a contact in her phone so the two of them could get water. Mariha was upset that Lumina apparently lied about her date of birth, insinuating that there was a reason the two grew apart, but sent the date to the contact anyway.

On the 28th, Mariha opened the box and found another piece of paper instructing her to work with Lumina. The previous day, Lumina had replied to Mariha telling her she made a mistake sending her birthday, but Mariha only mocked her for freaking out. Instead of posting the paper, she vented her frustrations toward Lumina, accused her of being the mastermind, and blocked her account, before finally saying she wanted to beat her until she "confessed." 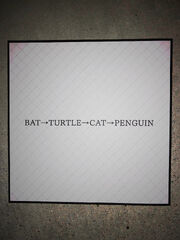 Mariha's first clue was a line of text reading "BAT → TURTLE → CAT → PENGUIN." In the Bats489 video, these four animals appeared in a sequence corresponding to the word "PAIR." Entering this Nirvana Spell on the Hidden Bats website revealed the code [206126014] to open the first layer of Mariha's box. The site also revealed the following text:

In this world, unexpected glitches have occurred.

For example, telepathy, to read the thoughts of others. Psychokinesis, the power to move objects with one's mind. Superhuman powers. Reincarnation.

These extraordinary abilities are "bugs." Glitches in this world. 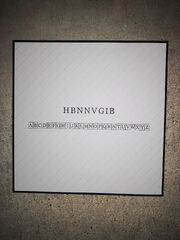 Mariha's second clue was the letters "HBNNVGIB" above the alphabet in a row of boxes. The Bats489 video featured a similar alphabet written from Z to A. Matching each letter to its opposite this way (or using the Atbash cipher) resulted in the word "SYMMETRY." Inputting this Nirvana Spell to the Hidden Bats site revealed the code [676229840] to unlock the second layer of Mariha's box. 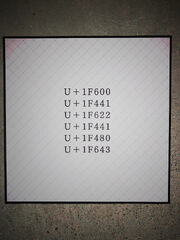 Mariha's third clue was six lines of text, each corresponding to a Unicode emoji. These could be matched to emoji from the Bats489 in sequence to reveal the word "MUTUAL." Inputting this Nirvana Spell to the Hidden Bats site revealed the code [197703800] for the third layer of Mariha's box, as well as the following text:

Have you ever doubted your "senses"?
Have you ever thought to yourself, "is this feeling real?"
All human senses are ambiguous: there is no "absolute sense."

The whole existence of the self is made up of these false sensations.
So then, where is the unquestionable? 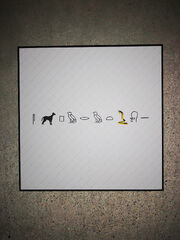 Mariha's fourth clue was a row of Egyptian hieroglyphs and Bats489 animals. Matching each hieroglyph to a letter of the alphabet and the animals to letters from the Bats489 video revealed the word "SEPARATE." Entering this Nirvana Spell to the Hidden Bats site revealed the code [701316368] to unlock the fourth layer of Mariha's box.