"I have to find her. She's more important than any of you understand. But you'll see! You'll hear her music, just like I did! Then you'll see!"

Ota is a 24-year-old NEET and Mayumi's son. An enthusiastic follower of A-set, he often pushes the boundary between idols and fans. He writes his own light novels and gets editing advice from his friend Mizuki.

In AI: THE SOMNIUM FILES, he is a primary person of interest during the New Cyclops Serial Killings, marked as a witness, suspect, and even victim depending on the branching story.

Ota is 24 years old. He has brown hair, which is smooth bangs on the front but spiky from the back, with the majority of his hair covered by his red cap, and his eyes are a pale brown.

He wears a long-sleeved light-blue hooded sweater with the word GEEK on the front. Over this, he wears a grey zippered coat with a white star inscribed in a red and blue circle below each shoulder. He wears a red cap with goggles strapped above the bill. He carries a black backpack and wears a Rider Belt based around Kamen Rider.

Ota seems to be a normal irritable teenage boy, as he's very uncooperative when you first meet him. He also seems to have a bit of a rebellious side, seeing how he has a cell phone even though his mom doesn't want him to. He's also a huge fan of A-set and is desperate to get her attention, to the point where he makes multiple accounts online in order to insult her, and defend her at the same time.

Ota was born to Mayumi Matsushita and Takero Matsushita on June 8th, 1995. He lived at the Matsushita Diner his whole life, and grew up gaining an interest in animated series, video games, and sentai shows.

As a child, he developed an interest in collecting Odoroki-man Chocolate stickers. One day, when Ota was eight years old, Mayumi tried to buy some of his favorite chocolate as a gift, but she bought a Momonoki-man chocolate instead. Ota yelled at her for getting the brand wrong. Takero suggested getting her a Mother's Day gift to make it up to her, so they bought her a floral knife with a custom engraving on the handle ("Mom, I love you always") and a floral-pattern apron. Mayumi was moved to tears, and the three took a family photo together.

In 2011, the Kabasaki Chemical Plant explosion occurred. Because Bloom Park closed down, the diner lost a large portion of its customers, and was forced to go out of business. However, Ota's parents were determined to support him, so they took out a loan and continued working hard.

In 2013, Ota left to college. After his father died a year later, he dropped out and returned home. He told Mayumi he wanted to focus on his career writing light novels, and that he knew a publicist who could help him get started. However, Ota never published anything during his time at home.

This section is a stub. Expansion needed.

Some time in the past, Ota met Iris Sagan and Mizuki, and as their friendships grew, he began to grow feelings for Iris. Ota and Iris spent a lot of time hanging out together, either shopping or at each other's houses. Once Iris started her net idol career as A-set and her videos on her Lemniscate channel, Ota was one of her biggest supporters.

On November 1st, 2019, Ota got a call from Mizuki after 8:00 PM. She told him that someone sent her a NILE message calling her to Bloom Park's merry-go-round, and she wanted him to come along since the area was restricted and she was scared to go alone. They arrived around 9:00 PM and discovered Shoko Nadami's body tied to one of the merry-go-round horses. Ota panicked and fled the scene, leaving Mizuki alone. He dropped his phone in a puddle, so he called the police with a nearby payphone.

The next day, Iris asked him if he knew anything about Shoko's murder, as it had been reported on the news. He told her he found the body and explained the details of the crime scene to her.

While waiting for Iris to finish recording a podcast, Ota met Kaname Date in the Lemniscate Entertainment Offices lobby. Date discovered the To-Witter sub-accounts Ota used to bash A-set while defending her on his main account. When Date threatened to tell others about the sockpuppeting, Ota agreed to talk, and told him about Mizuki contacting him, and later finding the body. He also explained how he met Mizuki, and the proofreading she did for him.

Eventually, Iris returned from her recording session, and Ota introduced her to Date. He asked Iris questions about the case, and she explained that Ota told her about finding the body. Before Date left, Iris asked Ota to film a video of her hugging Date and begging him not to leave, then used the video to blackmail him into taking her along to the crime scene.

A: Witnessing "Renju" and "Iris"

On Saturday evening, Ota went to Akihabara to buy a new phone. While he was there, he witnessed Iris coming out of Sunfish Pocket around 6:00 PM, along with Saito Sejima in Renju Okiura's body. A few hours later, Ota spotted Renju's car stopped at a traffic light. To his surprise, he saw Iris (who was actually Saito at the time) behind the wheel, and asked what she was doing. Saito made up a lie about running an errand for Renju, and asked Ota to keep it a secret, since an idol driving without a license could damage her career.

B: Disappearance of Renju Okiura

B: A-set's Visitor and Date 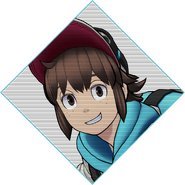 Ota Matsushita as an icon

Ota's bio in the FILE

Ota and Mizuki finding a body

Ota having a talk with Iris and Date