"Dreams are a collage of many memories intertwining and blending with each other. Isn't it incredible?"

—Pewter, in the AI: THE SOMNIUM FILES Character trailer

He is the engineer of the Tokyo Metropolitan Police Department's Advanced Brain Investigation Squad (ABIS), working under Boss. He also works alongside Kaname Date and Aiba. He is the inventor of the Psync system.

Pewter is 36 years old and stands at 186 cm tall. He has short gray hair, no eyebrows, and wears a translucent green visor over his eyes. He wears a full gray bodysuit and matching shoes with angular accents in different shades of gray. On top, he wears a stylized lab coat with green lining, featuring a tall popped collar and large folded cuffs. The belt at his waist holds a tablet device of some kind. He also wears a silver wristwatch and shoes that match his bodysuit.

Among his coworkers, Pewter carries himself with a calm and professional demeanor. He is passionate about his work on Aiba and the Psync System, and will readily explain their functionality when asked. Despite his studious attitude, he does sometimes complain about Boss and Date heaping extra work on him, and has a unique sense of humor. Pewter also cares deeply about his loved ones, and is willing to go behind Boss's back for their sake if he feels he must.

Much like Date and Boss, Pewter has a perverted side, and discreetly stashes his pornography in his office much like Boss does.

As an adult, he adopted the nickname "Pewter" and began working at the Tokyo MPD's ABIS. There, he was an engineer working under Boss, and used the Wadjet System to create the Psync System. The Psync system allowed a Psyncer to dive into a subject's dream to search for clues. The system also had a top-secret function that would allow the Psyncer and subject to swap bodies by exceeding the machine's time limit. At some point, the Chiba police department began working on a prototype.

In October 2013, the bodies of several women were discovered in Akikawa Valley, having been killed between May and September. Each of the victims had their right eye removed posthumously, and the case was dubbed the Cyclops Serial Killings after the media received a letter from the self-proclaimed "Cyclops."

Around the same time, Boss's old friend Hayato Yagyu came to her for help: he had been working as an assassin under Rohan Kumakura, and had been instructed to kill his girlfriend and her daughter before quitting. Boss proposed using the Psync machine to swap bodies with Rohan, thus starting a new life and pinning all his old crimes on his former body. Yagyu agreed, and Pewter assisted with the Psync.

In Rohan's Somnium, Pewter and the others witnessed the Cyclops killings, and realized that the Cyclops Killer was actually a duo of Saito Sejima, who committed the murders, and Rohan, who removed the eyeball. However, before they could hold Rohan (now in Yagyu's body), a policeman on site let him leave.

After Rohan was arrested and sent to Fuchu Prison as #89, Pewter and Boss sent Yagyu (now in Rohan's body) to speak with Saito to investigate the Cyclops Killings. However, they lost communication with him for a week, until Boss discovered him wandering Golden Yokocho in Saito's body, missing his left eye and his memories.

The full details of the case were later classified. In the years that followed, the MPD received reliable intel that the prototype Psync machine had been scrapped and its pieces sold on the black market overseas.

Boss gave Yagyu the name Kaname Date and hired him as a Psyncer at ABIS, where he worked with Pewter to solve cases using the Psync system. On November 9th, 2014, Pewter used the Wadjet System to create Aiba for Date, an artificial intelligence that would live in his artificial left eye. Not only could Aiba assist Date in the field, she would also regularly administer oxytocin, which Saito's brain could not produce regularly.

Some time after Renju Okiura's divorce with Shoko Nadami in 2015, he and Pewter began dating. On an anniversary, Pewter gave Renju a gold wristwatch as a gift.

In 2018, Pewter learned of Rohan Kumakura's suicide, who he believed to be Saito Sejima at the time.

Prior to the New Cyclops Serial Killings, Pewter installed a few new features to the Psync System, including a function that would slow down time while the Psyncer remained immobile, and special objects that could alter the amount of time necessary to perform an action.

On November 1st, 2019, Shoko Nadami's body was discovered on a merry-go-round in Bloom Park, with her left eye removed. At the scene, Kaname Date discovered Renju's daughter Mizuki Okiura holding the apparent murder weapon. She was unable to speak due to her trauma, so Boss had her brought to ABIS the following day in the hopes of Psyncing with her, both to help her speak again as well as search for evidence about what she witnessed. Pewter operated the Psync machine, guiding Date through the process and monitoring Mizuki's condition.

In Mizuki's Somnium, Pewter and the others witnessed a mysterious figure appear at the edge of the Bloom Park merry-go-round. After the Psync, Mizuki's aphonia was healed, and she returned to the Psync control room to discuss the case. Date and Boss asked her a number of questions about what happened, and Date also asked Pewter about the mechanics of Somnium. Pewter explained that dreams were created from memories, and thus the figure would not have appeared if Mizuki had not seen it. He also explained that Aiba was able to appear in Somnium since she was linked to Date's brain, and a part of her transferred into Somnium as well. After the discussion, Date left with Mizuki to investigate Bloom Park again.

That night, Date and Mizuki discovered Renju's body at Sunfish Pocket with his left eye removed. The morning of the 3rd, Pewter and the other members of ABIS met in Boss's office to discuss the case. Pewter, crushed by the news of Renju's death, insisted that Date should know the truth of the Original Cyclops Serial Killings. Pewter and Boss explained only the publicly available details of the case, and pointed out that the profile of the victims did not match: the original victims were women with their right eyes removed posthumously, while the new victims included men and had their left eyes removed before death. Date was convinced there was a connection and frustrated that the rest of the case was a national secret, but Pewter could explain no further. Date left for Sunfish Pocket to investigate.

Date returned to ABIS with Iris Sagan (actually Saito Sejima) in tow to interrogate her. After learning that she was hiding something, Boss encouraged Date to Psync with her, so Pewter assisted with the process.

Inside "Iris's" Somnium, Pewter and others witnessed a figure kissing congressman So Sejima. Back in the Psync Room, Pewter, Date, and Boss tried to make sense of the Somnium, and concluded that it was unclear whether Iris and So were acquainted, as he was a public figure she could have seen on TV. Date went to question Iris again, and eventually left for Matsushita Diner.

Around 3:00 AM on the 4th, a livestream began from the Okiura Fishery Cold Storage Warehouse of Iris's body with her left eye removed, as someone in a polar bear costume prepared to cut her with the blade of an ice cutting machine. Thanks to Date's timely arrival, Iris and Ota Matsushita were saved. Date would later return to ABIS in the evening to Psync with Ota with Pewter's assistance.

In Ota's Somnium, Pewter and the others witnessed the polar bear wield Mayumi Matsushita's floral kitchen knife, and Date left to speak with her. He brought her back to ABIS for questioning the following morning, but Pewter explained that the Psync machine was still inoperable. Date and Ota had not been very compatible, and he had to push the machine harder to get it working. Boss gave him six hours to fix the machine (much to Pewter's distress), and Date left to investigate and planned to return to Psync with Mayumi later.

That afternoon, Pewter called Date to let him know the Psync machine was up and running again. Date informed him that he had just found So Sejima's body with the left eye hollowed out, and that he would return to ABIS. Back at ABIS, Date caught Pewter up on the details of the case, and Pewter assisted Date in Psyncing with Mayumi.

AAB: Search for the Injured Culprit 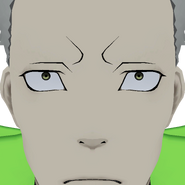 A high-resolution render of Pewter's eyes, showcasing their color.