On May 20th, A-set opened up her own Weibo account to tweet out in Chinese for her audience.[1] As such, these "tweets" are written by A-set herself, and as such, what she says is considered part of her character. Unlike Twitter being changed to To-Witter, the title of Weibo remains unchanged within the context of the series's universe. If you wish to see the companion page to the Weibo Archives, check out the To-Witter Archives. 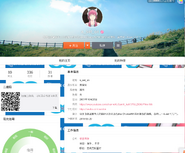 Sneak Peek at AI: THE SOMNIUM FILES LE/Day One Edition![]

You Won't Believe the Friend I Just Made![]